The mod comes in three armor value versions which render the armor transparent on dog meat.

K-9 Harness is a tactical backpack and body armor. It provides new modular body armor with various textures and meshes for dog meat. K-9 is created after Police and Military K-9 Harnesses. It has a Craftable backpack, side pouches, ballistic weave, and different patterns and colors.

You can remove or add any equipment with customization at Armor Workbench.

Strong is an active companion and super mutant of fallout 4. he is found at the top of the trinity cell locked up with his teacher.

Rex Goodman and Strong are imprisoned by other Super Mutants. Strong has higher health as compared to other active companions. You can balance its normal balance by wearing Super Mutant Armor. 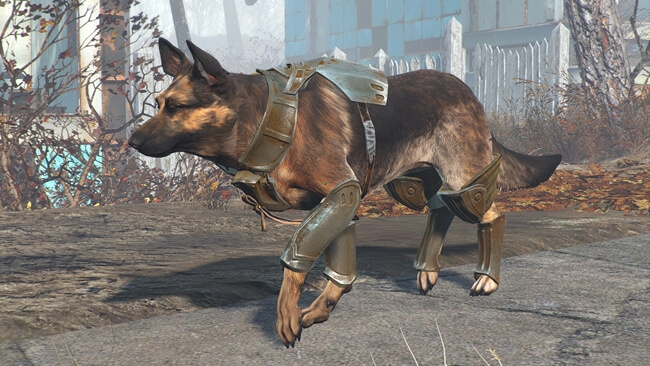 Dog armor is a type of armor wear by Canines in Fallout 4. Dog armor has variations in suits with optional helmets. Helmets have variations in lights, heavy and regular variants. The nature of its design allows it to use by only dogs.

The Retexture of Dogmeat makes the dog more look like Wolf. It doesn’t alters the colors but adds white teeth, nail coloring and retained fine skin details. also adjusts fur on footpads and dark areas. It also has three different sets of eyes to use. You can also make some scars on one side of the face or in any way.

Combat Power Armor Mod is StandAlone mod of Fallout 4. The mod allows you to alter any Synth Armor, Vault Suit and Combat Armor of the game. The mod provides you 2700 possible color variations with 14 camo patterns and 174 Decals. You can make any combinations for heavy, medium and light Armor.

Dog armors are located in a small cave protected by guards of mongrel. In the mid of Rocky Parks and Walden Narrow Pond along with dog helmet and a chain of dog collar. A super mutant behemoth also guards this cave near the Stonehenge of cars. Dog armor can also be found on some Raider Guard dogs of fallout 4.

Why do you need a dog armor mod?

Fallout 4 dogmeat armor mod, even though the german shepherd companion to the sole survivor has its perks of being around, is pretty useless or cumbersome in a lot of hostile situations. The developers made its armor to be just more of a decoration piece rather than something useful, due to changes in decisions halfway through the development of the game.

which is why players were left wondering with questions if the does dog armor does anything in fallout 4, sadly, it does not. Considering how dogmeat is weaker compared to other dogs in the game in terms of carrying stuff and other ranging abilities it is almost a no brainer that requires an armor. we’d hope to see a variety of armors for the doggo in fallout 4 mods list.

Which mod to consider and try first?

Thanks to mod community for Fallout 4, a lot of fallout 4 dog armor mods are available from which the name of k9 harness is well known for anyone making a google search for the same

Fallout 4 dogmeat mod K9 harness enables a player to add/remove items such as backpacks and side pouches from the back of your pooch, with ballistic weave, 12+ faction patch sets, and 8 different color patterns and textures you can customize your companion through the journey in a useful and awesome way

How to install the Fallout 4 Dog Meat Armor Mod?

for the information on installing the mod, which is similar to any other fallout 4 pc mods, there sure are other armors you should take a look at such as Dogmeat and strong armor by TumbaJamba and MunkySpunk.