Fallout 4 Sanctuary Wall Mod is a complete rebuild mod which has changed terrain with new roads instead of a bridge. All houses are accessible having furniture, kitchen and closet door. All houses are repaired with new textures and windows.

Sanctuary Hills is located on a small island that is accessible by a wooden bridge. Sanctuary Hills was the home of Sole Survivor which was hit by atomic blasts.

After blasts, homes get decay, collapsed and in state of disrepair. Sanctuary Hills becomes the first new commonwealth Minutemen settlement after blasts.

This mod can be download from the link which builds walls to existing or new Sanctuary hills. The Blueprint has Covenant walls with no other parts of buildings. So when you start a new one you can import them into Existing settlements. 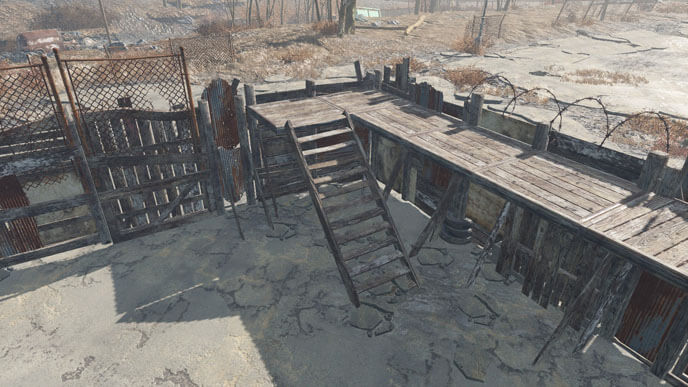 This mod restores Sanctuary’s houses by using the workshop. It restores outer walls and roofs along with cleaned interior. This mod also restores the bridge. It can also repair existing settlements without collisions, troubles and take new structures into account.

This mod gives you a bed under the bridge if you need to nap along with dog meat. If you scrap bridge no invisible parts will be as the terrain has fixed to work with a bridge. You can gear up in a cool outfit while dead drifter is still on road.

If you are tired of cleaning up sanctuary in Fallout 4 then this mod is a simple modification of the game. This simply removes debris, trash, dried grass from sanctuary hills. This mod lowers the terrain and fixes the sidewalks.

The sole survivor can manage and create their settlements in Fallout 4 around the commonwealth. The workbench in fallout 4 allows the payer to construct their own home as they want which can be customized later, once built. Inside lights, furniture, decorations, and outside plants, crops added. Now you have constantly maintained your Settlements throughout the game along with NPCs. You have to use workshops to repair the failed or damaged items.