The SSN-37A is a Covert Fallout 4 Chinese submarine beached at the cpast of Point Lookout. Th385-2e Covert Submarine is a Spy Submarine to investigate the Hostile Water. The SSN-37A is one of the three main submarines of the Fallout series. The other two are The Vessel and Yangtze. The designation SSN is Submersible Ship, Nuclear.

The Yangtze is a nuclear powered ballistic Chinese missile submarine. Also Yangtze is commanded by ghoulified Captain Zao. The Yangtze is beached in the shallow water of the Commonwealth. It is in South of Boston Airport and north of Four-leaf Fishing Pack Plant. The Submarine Yangtze is not there on the map until Sole Survivors swims out. The Here There Be Monsters Quests will start automatically. If it has not gained from Donny near shamrock Tap House.

Fallout 4 Where To Find Submarine

At the terminal of military research in Fallout 4, You may have come across the Chinese Submarines. There you have to find a boy named Donny. He is in the North of Castle near the Four Leaf Fishing Plant. He will tell you about the investigation of a sea monster. The quest Here There Be Monsters will automatically start. Now Swim out into the water and you’ll find inhabitants. Start helping them to restart the Yangtze and head to china. After SSN-37A, the second Chinese submarine of Fallout Series is the Yangtze.

Submariner Uniform is a standalone version and AWKCR is required.

Submariner Uniform mod gives the 7 different variations of Uniforms for Submariners. Some have minuteman symbols and some without it. Mod has two minutemen military caps and three matching hats for a uniform. The mod can be downloaded from the Nexus Download manager.

Fallout 4 Here There Be Monsters

Here There Be Monsters Quests will begin once you head to the Yangtze. The Yangtze is situated in the east of the shamrock tap house and north of Four Leaf Fishing pack Plant. Go to the Yangtze and there you encounter some radiations. Inside the Yangtze, you must have Radway and Rad-X along with you. Talk to Zao there and start repairing Submarine. Next, go to Warhead and you will encounter Feral Ghouls. After getting Dampening Coil return back to Zao to complete Quests. 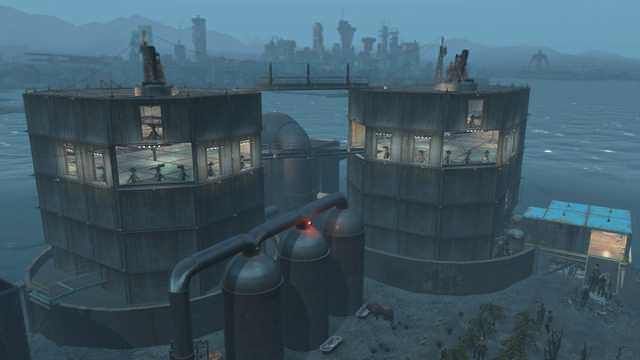 Four Leaf Fish Packing Plant is Situated in Commonwealth. The fish packing plant is surrounded by Feral Ghouls and Super mutants. To get access to Marowski Chemistry Lab Modified tripwires of the area can be used. The area of Fishpacking is itself filled with Feral ghouls at exterior and immediate. Conveyor Belts with dead fish & factory style metal walkways lead to the main factory floor.

Dampening Coils in Yangtze Submarines are needed to prevent the melting of Nuclear Reactor. Due to melt down the original Dampening Coils were destroyed before repair time. After the discovery of Yangtze, Captain Zao lead the Saugus Inwork and find new coils. So they used the new coils with nuclear fuel to restore power to the submarine.

The Shi has a major faction in the San Francisco area of Fallout. The ancestors of Shi were the crew members of Chinese Submarine. They managed to established Foothold in the city even after high radiations. After that, the frame of submarine moved to Steel Palace created from metal. By 2242, The Shi became a major development and research house in Wasteland. They were helped by the Cultists and Gangs of San Francisco.

Zao is the Ghoulified Captain of Yangtze Submarine. The Zao is Soft Spoken and Welcoming man, especially for American soldiers. After the strike of Yangtze to sea mine, the radiation from the reactor turned the captain into Ghoul. The Zao started gathering information and intelligence. This helps him to repair the vessel and come back to home, Zhongguo. He can build or die but he wants to see his home last time.