Vertibird is a designation of “Vertical Takeoff & Landing Craft” which multipurpose tilt-wing aircraft. Brotherhood has introduced several Vertibirds with the ability to produce more. The vertibirds can also be modified docked at Airship, The Prydwen.

Personal Vertibirds are craftable Vertibirds which require no affiliation. Personal vertibirds can build via Workshops, it will be under the same place where artillery and robot workshops show up.

You don’t have to be in a faction or be in brotherhood to build.

You can also build Personal Air supports to support your Vertibirds fly up and protect your settlements.

This mod alters the textures of vertibird in Vertibird US Army Retexture to have a BOS theme by PowerArmour. It changes flat gray Textures to more vivid with new interior & landing gear texture. 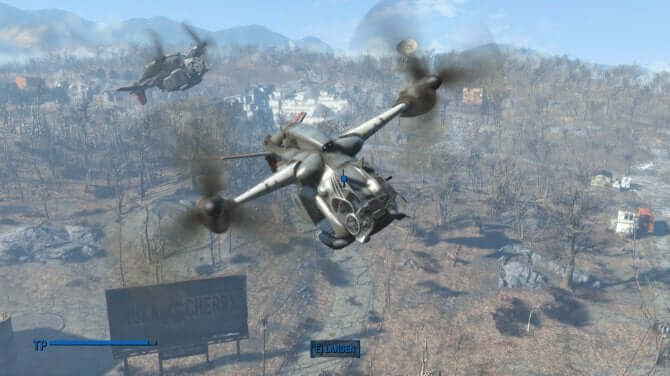 The Vertibird signal grenade is a weapon in Fallout 4 which can only be used by the members of Minutemen, Brotherhood of steels and railroad upon completion of the main questline. The Minutemen has the following two similar support items: Smoke Grenades or Flares. The smoke grenades strike nearby artillery and flare will give signals to troops.

Personal Ride mod was created to give alternative and fast travel methods to those who don’t like Vanilla Fast Travel System and are playing the Hardcore Survival Mode. A player can travel to selected Location by car which also acts as a container to store items. repaired for utility and with Fuel to travel.

Fallout 4 lacks vehicles that support terrain so download Driveable Motorcycle mod which adds motorcycle in a museum. Once you found it, you can travel on Wastelands smoothly. No other mods allow you to travel on the terrain.

You can Download this Mod from the below link. With this mod you can build your Vertibird which has Minutemen Pilot, this can be ride by your companion and Dogmeat. You can fly to your Custom Destinations & can also destroy your enemies if you want.