Fallout 76 Alien Blaster is an energy weapon of Fallout 76. The Alien Weapon has decent damage. The Fusion Mag mod can convert the Alien Blaster into Fusion cells. But this makes the weapon weaker than a pistol.

The Alien weapon is a combination of metal, furnished with high pulsing energy. The alien Blaster can be modified into other mods.

Black Mountain Ordnance Work is a forest region of Appalachia in Fallout 76. The location has a fenced area contains the Industrial Building Area. The building has a single room with cabinets and desks. The skeleton of a dead Soldier holding the helmet is in the room of a building. The Industrial area is full of broken machinery, toxic water, and radioactive barrels. 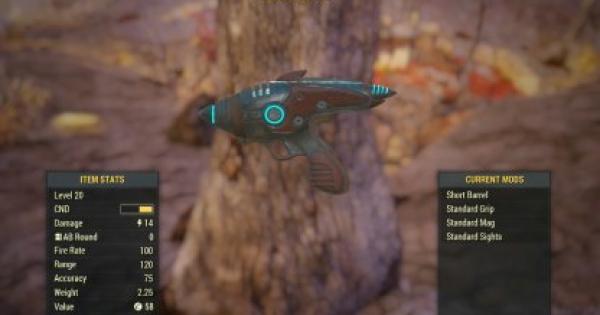 The Alien Blaster Round is a type of Ammo of Fallout 76. The blaster Round consists of a Cylinder of blue energy covered by metal. The Alien Blaster uses this type of ammunition. The damage to the ammo is very high. The Blaster round is found in Black Mountain Ordnance Works in the southeast direction. The ammo can also be obtained from Shadow Breeze Apartments of Morgan town.